Blog Post Looking at the Russian fleet sailing by (eng)

Looking at the Russian fleet sailing by....

Not so long ago, I was in a restaurant & watched a magician at work at our table, there one kid in particular that was smart enough not to look at the handkerchief waving, but on what else the magician was doing. Of course, the kid spotted the secret of the trick and the magician was obliged to quieten him down.

Fast forward to about 10 days ago, the British tabloids were waving the equivalent of their handkerchief, “the Russians are coming and are sailing down the Channel.” Likewise, politicians and media alike had their field day, mostly on mocking the Russian’s Navy Kuznetsov’s large volume of black smoke coming out of the funnel. And then a whole load of memes were rustled up and everyone had a good laugh. Some media pundits spoke about the majority of the Fleet, having sailed down, well, no, not quite the whole, just about 10%.  There were 8 surface ships in total, with 4 being auxiliaries (tugs & tankers). The other combat ships included:

Just what are we supposed to make of all of that?

A lot of the media fuss was centered on the hot geopolitical chestnut called Syria, more precisely Aleppo.  NATO officials & EU politicians said that the fleet would participate in the Russian bombing of Aleppo and kill civilians. Consequently, at a very late stage, a public campaign was started to ban the entry of the fleet from both and Valletta. It was instigated by Avaaz and EU politicians, predominantly based on calling the Russian group a “fleet of death”(1).   Apparently, it is totally irrelevant that the US & other NATO member states actively provide support to the Saudis in Yemeni airstrikes, where countless civilians are killed weekly. The hypocrisy of the EU has no boundaries. 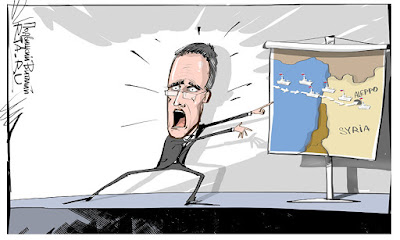 NATO Secretary-General Stoltenberg said in an interview (Oct 26) : “The thing which is different this time is that we are concerned about the possibility that the Kuznetsov carrier group can be used as a platform for more attacks against Aleppo and Syria, and thereby exacerbating the humanitarian catastrophe we already see in Aleppo and Syria,” …“And therefore we are following this more closely and we are concerned about the potential of increased Russian airstrikes against Aleppo,”  (as reported by TASS). Plainly, Stoltenberg is trying to make a mountain out of a molehill.

The Russian Northern Fleet deployment of the Kuznetsov & escorts is not strong enough to change the situation in the Levant.  The banning of the Russian naval ships wasn’t a success story for those concerned, maybe just another feather in their caps.  If anyone had studied the small print concerning the Kuznetsov, they would have seen the stated range of over 15000 km at a speed of 18kts. So there is no need for the Kuznetsov to need to call into a port, (more so one under NATO umbrella). In fact, the politicized bans probably impacted the smaller auxiliary ships the most. In any case, the fleet had 3 support tankers at its disposal, known colloquially as oilers. So, it seems that refuelling & replenishment was undertaken off the Moroccan coast.

Russia is catering for all eventualities.

In military terms the arrival of the carrier will significantly increase the offshore air defence capacity of the Russian forces located on the coast of Syria, particularly at a time of a heightened level of US –Russian antagonism. An existing undeclared no-fly zone has been already been established by the Russians, with the S-300 & Antey 2500 +S-400 missiles at the Khmeimim airbase. This was a response to the US-led coalition airstrike on Deir Ez Zor in September. However the offshore defence of the Syria coast is currently considered as being weaker; as such it needed some beefing up.

Somewhere lost in the MSM ”smoke joke” haze, the addition of two cruisers and 3 destroyers will certainly improve the offshore Syrian defensive shield, with the necessary armaments & systems. Russia will establish a strong “no fly zone” over Syria, to scupper the US’ & NATO’s version of one.   In all likelihood, if the US chooses to carry out military operations & tries to take out Syrian airbases, they will resort to launching missiles. The ‘eyes’ in the ships can give suitable warning and ability to shoot-down incoming missiles, since the fleet uses the Fregat and Podberezovik radars . The former can detect aerial targets at a distance of 250 km, the latter at 500 km. Russia is still catching up with NATO on using seaborne AWACS; so for the fleet is a kind of stopgap measure.

As outlined in the UNZ article by the Saker (2), the Kuznetsov isn’ t in fact an aircraft carrier in the Western sense of the word but an aircraft-carrying missile cruiser. The article outlines the Russian Navy firepower succinctly.  A carrier carrying missiles? Yes indeed, the heavy supersonic anti-ship Granit missile to be more precise. Missile power rather than airpower is the key issue in all of this. Moreover, in the worst –case scenario, there is a lot of strike back firepower capacity in the form of Granit missiles; not just from the Kuznetsov, but  the Pyotr Velikiy & soon some nuclear submarines (3).  Another notable point is the fact that the Kuznetsov doesn’t have steam catapults to launch fully armed & loaded aircraft, such as the US carriers but uses a deck jump ramp, which limits the payload of aircraft. Thus, Russian naval MIG 29s & SU-33K are likely play a very limited role in airstrikes, unless they are deployed on-land. Essentially the aircraft could be more useful doing Combat Air Patrols.

The existing fleet currently stationed off Syria includes the Varyag missile cruiser which has been in Syrian waters since the beginning of this year and also more than likely, a permanent submarine presence somewhere off the Levant.  A couple more warships are also on their way to Syria, including another Kalibr carrying vessel to add to the growing fleet. Recently, the Yantar, a naval oceanographic ship carried out surveying operations offshore and in all likelihood, provided support for the arrival of further submarines.

Ship-launched missiles have been used in anger by the Russians, in highly-visible actions such as the Caspian Sea Fleet back in October & November 2015 with Kalibr missiles launches. 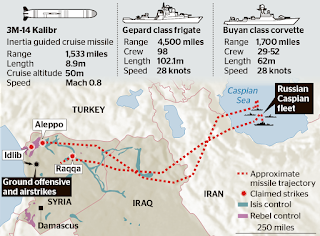 Setting Syria aside for one minute, one significant area of close & very intense interest, especially by NATO is the Baltic Sea. One noteworthy Russian Navy deployment was of the Zeleny Dol and Serpukhov, 2 corvettes from the Black Sea.   This is took place around the same time as the Kuznetsov deployment, yet it generated a fraction of the MSM attention and this only happened when the 2 vessels arrived in the Baltic Sea. Why is this of interest? Again back to missiles.   Just as their Caspian Sea counterparts, the2  Buyan class corvettes carry Kalibr missiles. This fact alone sent the Baltic states into fit, as these missiles have an extensive range & can be nuclear as well.

Ultimately, the deployment of the Russian carrier fleet was done as a mixture of PR, blue water training, deterrence of any potential military attack on Syria and also in anticipation of the outcome of the US election. 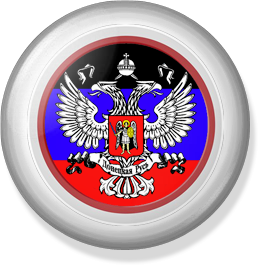